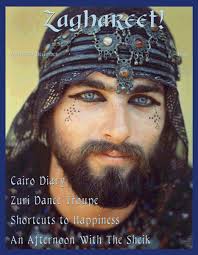 YIP Podcast did a great interview with John Compton of Hahbi ‘Ru recently, which I thought y’all might enjoy if you weren’t already aware of it.

When asked how he became interested in Bal Anat and studying with Jamila Salimpour:

“I moved to California in 1971…I think. In 1972 was the first time I saw Jamila’s group. I didn’t know if they were from the moon or what the heck they were. The drum beat just got to me, and I just wanted to be a part of it so bad.


I approached some of her dancers and they said ‘Oh no, I can’t teach you. Jamila… that lady…she would kill me is he knew I taught you.'”


“Finally somebody…a friend of mine… told me where Jamila’s secret studio was. And there was a little room you went in before you actually went into the studio and there was a black curtain which separated the two. She said wait until after the class starts, and sneak into that room and you can see


And I pulled the curtains apart just enough to peek into the room with one eyeball, and then try to do the step in this little waiting room, and I did maybe basic Egyptian, Arabic 1, 2, and 3 or something. And all of a sudden the curtain ripped open. Jamila was a step above where I was standing…she looked huge…and she just went ‘YOU!’ pointed at me, ‘IN HERE! SIT!'”

Wanna know what happened then? You have to give it a listen! More about John Compton’s first performance with Bal Anat, why he quit and moving out on his own, influences on Hahbi ‘Ru’s stylizations, and so much more.